Alexander the Great conquered many places including the Mediterranean Island of Rhodes, which was part of ancient Greece. Alexander died quite young from an insect bite around 300 BCE. His three generals split up his empire. All of his generals wanted to control the island of Rhodes. Rhodes was situated perfectly to be a crossroads of trade.

The people of Rhodes supported one of the generals, General Ptolemy. Another of Alexander's generals was angry that the people in Rhodes had not supported him. He was so angry that he sent his son level the city. His son was not successful. General Ptolemy came to the rescue. General Ptolemy sent some of his warriors to help the townspeople defend their city. Together, they drove the enemy army away.

With joy, the townspeople used the armor and war machinery left behind. They melted down the bronze, and used it to build a giant statue of their patron god, Helios, to thank Helios for helping them save their city. The statue was 110 feet high and stood on a 50 foot base. Each morning, the sun glittered off the bronze plates that covered the statue. It must have been quite a sight! It only took about 15 years to build this incredible statue, and the materials mostly were free! 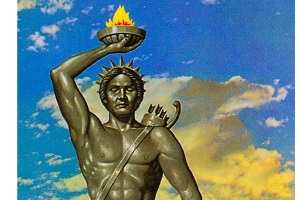 Only 56 years after the statue was built, it was toppled by an earthquake. Most of the pieces fell into the harbor.

The statue's thumb, however, was still accessible. The thumb alone was quite large. Many people traveled to see the statue's thumb and to try and put their arms around it. But no one could. The thumb alone was that big! The king of Egypt offered the people of Rhodes money to rebuild the statue. But the townspeople said no. They were afraid their god Helios had tossed the statue down in a fit of anger. They decided to leave the statue exactly as their god had placed it.

Many years later, around 600 CE, Arab traders finally removed the remains of the Colossus to use as scrap metal. Legend says it took 900 camels to haul the pieces away.

The Colossus of Rhodes in PowerPoint format (Donn)

Return to 7 Wonders of the Ancient World Index